Skip to main
Next Up: How can the Water Quality Accountability Act (WQAA) become a national model for achieving excellent water infrastructure?

Where are the lead service lines in New Jersey?

New Jersey, along with states across the country, is confronting a public health threat: lead in drinking water. The primary source is lead service lines (LSLs), hose-sized pipes containing some amount of lead that connect water mains under the streets to buildings. But which communities are most at risk?

As of August, 2019, lead service lines have been found in 104 water systems, potentially exposing some portion of over 5 million residents who live in these service areas. Lead may also be present in pipes and plumbing in older homes, schools and other buildings. Some water utilities treat drinking water with corrosion control chemicals to minimize the leaching of lead from pipes and plumbing.

New Jersey Future mapped data that the New Jersey Department of Environmental Protection (DEP) collected from community water systems to show the intensity of LSLs across the state. Most LSLs were installed before 1940, so older communities are more likely to have higher concentrations of the pipes. 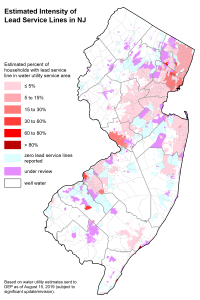 If the map indicates the presence of LSLs in your community, you can contact your water utility to request more detailed information on water test results, and if available, the location of lead service lines. Your water utility can tell you if protective actions, such as installing an in-home filter or flushing your pipes, are recommended. You can also speak with them about how to determine if you have a lead service line and/or lead in indoor plumbing or fixtures. Community results are also available on DEP’s Drinking Water Watch website.

The information in DEP’s LSL inventory is dynamic, as inventory records are often updated based on ongoing field operations. The data used for this map was current as of August 15, 2019 and was gathered from the utilities’ lead and copper sampling plans and a survey issued by DEP. Some of the 104 water systems with LSLs provided verified locations of the pipes while others provided estimates based on records. Many systems that reported the presence of LSLs will likely find more, as there are another 150 water systems that either are not in a position to make an estimate or have submitted an inventory that has not yet been evaluated by DEP. Part of the LSLs are typically under the authority of the utility (the portion from the street to the curb) while the other portion is located on private property. The number of LSLs located beneath private property may be significantly underreported in the survey results to date. As a point of reference, the American Water Works Association estimates there are 350,000 LSLs in New Jersey, while DEP’s survey to date captures only 161,000.

A task force convened by Jersey Water Works, a collaborative of diverse organizations focused on transforming New Jersey’s inadequate water infrastructure and of which New Jersey Future is a member, will soon be releasing a report of recommendations for the state to virtually eliminate lead in drinking water in 10 years.

“Under Review”
This map segment reflects the 150 water systems that either are not in a position to make an estimate (i.e., often due to poor or incomplete inventory records) or that submitted an inventory that has not yet been evaluated by DEP. (Those areas are colored purple on the map.)

“Well Water”
Approximately 10% of the state population is served by private well water, which is not part of any water system reporting. (Those areas are colored white on the map.)

The table with estimated percent of housing units having a lead service line per water utility was joined in a GIS layer with water utility boundaries based on a unique identifier present in both tables. The map of lead service line estimates per utility was manually classified into 6 interval classes based on natural breaks in the data distribution. Water utility boundaries show GIS data as of 2017 for public community water purveyor service areas, as acquired from the DEP Open Data website on August 20, 2019.