In 2017, the City of Newark, New Jersey, was facing a crisis: the third consecutive test of the city’s water exceeded the federal limit of 15 parts per billion for lead. Something had to be done. Where others may have been inclined to delay action or downplay the risks, Newark developed a plan that would not only drastically reduce exposure to lead in drinking water but serve as a national model for doing so. 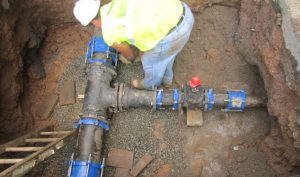 Newark, New Jersey’s largest city, is home to 282,000 residents who are served by the City’s water system. In June 2017, testing revealed 22% of 129 samples of the City’s water exceeded the federal limit for lead. Since more than 10% of samples exceeded the federal threshold, the City had to inform its residents. As of May 2020, every six-month test since June 2017 has shown exceedances.

The City attributes the source of the problem to failed corrosion control treatment (sodium silicate) at the Pequannock Water Treatment Plant, which supplies water to about half of the city. A new corrosion control treatment system using zinc orthophosphate was installed in May 2019. Water from the Wanaque Water Treatment Plant, which supplies water to the East and parts of the North and Central Wards, did not show signs of elevated lead levels.

In 2018, the City developed the first iteration of its LSL replacement program in which it set out to replace all 18,000 LSLs over eight years through a voluntary program. To fund the program, Newark enacted an ordinance authorizing the sale of $75 million in city bonds and a $12 million loan from the state’s Water Bank with up to $9 million in principal forgiveness. Residents could sign up to have their LSLs replaced at a cost of $1,000. Full replacements to remove the entire portion of the pipe running from the water main in the street to the house can cost up to $7,000. This version of the program received lackluster response in large part due to the cost imposed on the property owner.

Subsequently, in August 2019, Newark arranged a different financial package, securing a $120 million bond with help from the Essex County Improvement Authority which allowed the City to cover the full cost of the replacements and cut the timeframe for completion from eight years to under 36 months. A reworked lease agreement with the Port Authority of New York and New Jersey will bring in $155 million to service the debt on the bonds. This funding allowed the City to revamp its program so that there would not be a cost share for the property owners.

While extensive community outreach for the updated program resulted in over 3,000 residents signing up for the program, the City still needed to be able to reach the property owners and obtain their permission in order to complete the work. With about 80% of the housing units in the city rentals, this proved difficult. In September 2019, Newark City Council passed an ordinance that made it mandatory for property owners to sign up for the program and empowered the City to enter a property to replace an LSL even if the owner did not sign up for the program. This ordinance became an example for the state when, in January 2020, Governor Murphy signed into law legislation that allows municipalities to adopt an ordinance to enter properties to replace LSLs without property owner permission, after notifying residents.

In order to keep residents informed about the program, Newark developed a comprehensive website that outlines the program and keeps a running count of how many LSLs have been replaced. The website also has a tool for residents to learn the material of their service lines and to see where replacements have already happened in the city. This public database was welcomed by residents, many of whom felt they would not have received information about lead in their water from their landlords.

Residents are notified when their LSLs will be replaced, and once the work is complete, workers explain that filters provided through the program should be used until tests come back confirming that any lead jostled loose in the replacement has been removed. Within three to six months, residents automatically receive a testing kit to fill with water and return to the City. The City retained 120Water to develop a comprehensive communications program that would engage residents. The communications program emphasized outreach to children to make learning about water fun and included stickers, puzzles, and games.

With these two fundamental program changes—mandating LSL replacement regardless of property owner permission and offering LSL replacements at no cost to the property owner—the City of Newark is the first to implement the approach recommended by the Jersey Water Works Lead in Drinking Water Task Force. Kareem Adeem, Director of Newark’s Water and Sewer Department, served on the task force and was instrumental in explaining obstacles to LSL replacement and identifying practical solutions.

Through the program, the City has been replacing LSLs at a rate of about 90 per day, slowing only briefly as the world recalibrated to confront the coronavirus pandemic. In March, when personal protective equipment (PPE), including masks and Tyvek suits, were in short supply, the City was able to rely on its database to determine which properties had already replaced the portion of the LSLs running from the edge of the property to the house—meaning that no interior work would be necessary—and focused on completing the work on those properties. Once PPE was available, crews of two workers conducted pre-construction interviews with residents to ensure anyone who was ill was isolated before performing any work.

Early progress by the City kept work on track during the pandemic, and the halfway mark of 9,000 LSLs replaced was reached in April 2020. On May 6, the City announced that it had replaced 10,000 LSLs, putting the City well on its way to replace all its LSLs within 24 to 36 months of its start date on March 13, 2019.

Newark’s remarkable progress demonstrates that LSL removal is not only possible, it’s within reach for communities across the state. New Jersey Future and other members of the Jersey Water Works Lead in Drinking Water Task Force have been working closely with the Murphy administration and members of the Legislature to require drinking water systems to adopt similar programs, which could virtually eliminate the risk of lead in drinking water in ten years.