Skip to main
Next Up: Finding a natural wastewater solution

That’s the message from New Jersey residents on what they want the water coming out of their taps to be. When scientists and engineers talk about water quality in terms of parts per million, parts per billion, and maximum contaminant levels, it can be easy to get lost in the jargon. New Jersey residents, 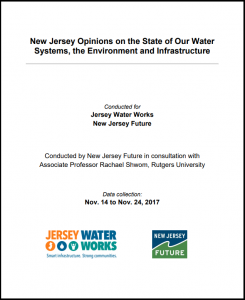 however, are crystal clear on their needs: clean, safe drinking water. In fact, based on the results of a survey of 1,175 of our neighbors, that should be the top environmental priority for the state.

Residents were surveyed in November of 2017 and had some significant opinions on topics related to water. They want investment in water infrastructure, with 90 percent of them saying that it should be important or a top priority for the governor and legislature. The survey also found a lack of familiarity of water infrastructure issues among New Jersey residents. Fewer than one in 10 New Jerseyans said they were “very knowledgeable” about combined-sewer overflows, stormwater runoff, green infrastructure or stormwater utilities. When respondents were given definitions of these terms, they recognized the problems and indicated support for addressing them.

Survey respondents also indicated that they saw a connection between water infrastructure and economic benefits, with 63 percent indicating that they believed that more government spending to improve our water systems would result in more jobs in our state.

The reason this survey was conducted was to get a baseline of what New Jerseyans know and don’t know about the state of their water systems, what their concerns are, and what is most important to them. To develop the survey, focus groups were conducted in New Brunswick and Jersey City to help researchers understand how community members talk about water and how they interact with water systems around them. Responses gathered from the focus group questions were used to help draft survey questions that would be relevant to New Jersey residents. Jersey Water Works members provided feedback on the draft survey questions and on what information would be most important to gather from the survey. Before fielding the survey, it was tested by Jersey Water Works members, New Jersey Future staff, friends and colleagues.

Jersey Water Works members will use the results to refine the collaborative’s education and outreach efforts, and will issue the survey again to see if the collaborative’s efforts have moved the needle on residents’ awareness of these issues. New Jersey Future will use the survey results to help bring additional awareness to New Jersey’s water infrastructure needs and to inform its work in CSO communities.