A statewide coalition today unveiled Sewage-Free Streets and Rivers, a coordinated campaign across New Jersey communities with combined sewer systems that overflow raw sewage during heavy rainfalls. These overflows can cause sewage backups into basements and streets, and dump an estimated 23 billion gallons of raw sewage into New Jersey’s waterways annually.”After rains, the raw sewage that spews into our waterways and backs up into the streets of many urban communities poses a significant health threat to people and denies folks their right to access to safely swim, fish and recreate local on local rivers and waterways” said NY/NJ Baykeeper Greg Remaud, one of the partners in the campaign. 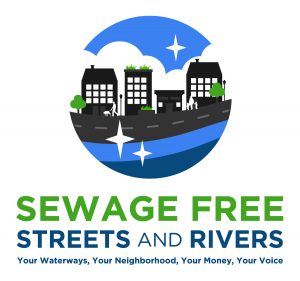 “This is a huge environmental and health issue that impacts hundreds of thousands of people in New Jersey,” said Nicole Miller, Newark DIG co-chair and another campaign partner. “The people who live and work in these communities need to know what’s being done about raw sewage overflowing onto their streets and into their rivers, and that they can and should have a say in the solutions being considered.”

“Upgrades to these aging sewer systems will be one of the largest infrastructure investments residents will see in a generation,” said Mo Kinberg, community outreach manager with New Jersey Future, a campaign partner. “It’s critical that communities affected by this work have an opportunity to speak up about how these upgrades will be implemented, so that they can help ensure the work really brings community benefits.”

The 21 municipalities with combined-sewer systems are also affected by private-sector disinvestment and a history of environmental contamination from industry. The culmination of industry and combined sewer overflows has had a disproportionate impact on low-income residents and communities of color.

“Residents in many of New Jersey’s older communities, like here in Newark, know only too well what happens when they get too much rainfall for the sewage system to handle,” said Drew Curtis of Ironbound Community Corporation, another campaign partner. “They have to deal regularly with flooding and raw sewage spills. This campaign is an opportunity to influence how those problems will be solved, and to advocate for the solutions that are best for them.”

“By July of 2019, the 25 municipalities and utilities that hold sewer treatment permits in these communities will need to submit a report evaluating alternative solutions to the sewage-overflow problem,” said Kim Gaddy, the environmental justice organizer with Clean Water Action, a campaign partner. “That means that now is the time for members of the community to speak up and make their concerns and preferences heard. The purpose of the Sewage Free campaign is intended to be used as a vehicle to coordinate and amplify the voices,” concluded Gaddy.

The goal of the campaign is to build capacity for community organizations to engage residents, business leaders and elected officials in communities affected by these overflows to learn about various solutions, and to indicate which ones they want prioritized. The campaign advocates for funding for extensive public educational outreach; for at least three meetings to allow meaningful public discussion of available alternatives; and for assurances that the solutions being evaluated will be cost-effective, reflect community values, and bring additional benefits such jobs, job training, local contracting and more green infrastructure and green spaces.

In 2015 the state Department of Environmental Protection issued operating permits to 25 communities and authorities with older combined sewer systems that carry both stormwater and sewage in one pipe. The permit requires these operators to develop plans for reducing the number and severity of combined sewer overflows, which happen when stormwater overwhelms the system. This combination of stormwater and sewage is released into nearby waterways, and sometimes floods area streets and backs up into basements. The plans require each municipality and sewage treatment plant operator to evaluate by July 2019 all the alternative techniques available to them to remedy the problem, and to file plans by July 2020 showing how they will implement these alternatives to reach the desired reduction.

The Sewage-Free Streets and Rivers campaign was developed by a group of organizations working to make New Jersey communities stronger and healthier places to live and work, and is attracting a growing list of partners, including:

The towns and utilities with combined sewer systems are: