Skip to main
Next Up: Tackling Combined Sewer Overflows

Green infrastructure is coming of age, and it’s time to demystify it.

If – like me – you don’t know the meaning of the word “bioswale,” then we’re in the company of legions of average citizens who might walk by bioswales every day without appreciating how really useful they can be.

A bioswale, similar to a rain garden, is a landscape element designed to soak up stormwater runoff and remove pollution. In other words, a bioswale is one of several new tools deployed by green infrastructure engineers to mitigate the effects of stormwater overflows in our cities.

And so bioswales — along with rain gardens, tree trenches, v 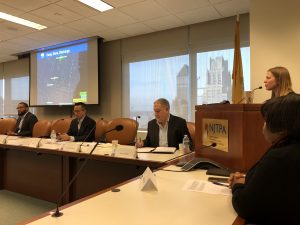 egetated bumpouts, and sub-surface storage — are tools that today’s “green” urban planners use to relieve routine stormwater flooding that comes from the increased intensity of our rainstorms.

Several green infrastructure project leaders presented their case studies at a recent conference on “Green Infrastructure and Transportation”, hosted by the North Jersey Transportation Planning Authority (NJTPA) in Newark, and co-organized by Together North Jersey and Jersey Water Works. No matter whether it’s the single square mile of Hoboken, or the five sprawling boroughs of New York, each planner described undertaking a painstaking block-by-block assessment of how to correct the legacy “grey infrastructure” of pipes, pumps and ditches, which is how most cities have managed stormwater runoff for as long as anyone can remember.

“This is an exciting time for green infrastructure,” said moderator Bill Cesanek (VP of Infrastructure Planning at the construction company CDM Smith) when introducing the day’s discussion. “Philadelphia and New York are leading the way, with New Jersey hovering in between, trying to figure out what to do. We’ve seen an enormous increase in interest.” 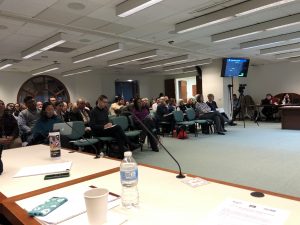 There will likely be an increase in funding too. Last month the NJ legislature voted to allow municipalities to set up stormwater utilities, to be funded in part by fees imposed on parking lots and other impervious ground installations. As of this writing, that legislation (S-1073) is awaiting the governor’s signature.

Cesanek says that Implementing green infrastructure in New Jersey has unique challenges: “Although NJ’s combined sewer discharges are on the scale of Philadelphia’s, instead of one city water department there are 18 entities in charge of sewage collection and 8 sewage treatment authorities, in addition to many more that manage the drinking water systems.”

Philadelphia’s strategy for reaching its 25-year green infrastructure goals is a combination of new stormwater regulations, incentivized retrofits and public retrofits. The most ambitious project now underway involves the plan to green two miles of a former industrial corridor along American Street, just north of Center City, to be completed by 2020.

Hoboken, a flood-prone town which has been suffering an average of four combined sewer overflows a month, is putting in place green infrastructure solutions designed to reduce that frequency to no more than four times a year. The Hoboken 2017 Green Plan includes using “parks as defense”, decreasing impervious surfaces, and generally including climate adaptation in all future planning.

New York City actually created an Office of Green Infrastructure in 2011, and Vincent Lee, Associate Principal at the engineering and design company Arup, says the existence of an official plan has made a huge difference in the ability to get projects off the ground. One of the projects he oversees is to institute 200 bioswales in the environmentally-troubled neighborhood of Newtown Creek (economies of scale: it’s more cost-efficient to contract out 200 than 5), and that involves walking through every street to identify suitable locations. It’s not only geographical or technical factors that make a good location. The residents have to be on board too. “Every city is different. Every solution must be context-specific,” explained Lee. “But in all cases you need community buy-in.”

That buy-in is not always easy to get. It turns out engineers need diplomatic skills to see most green infrastructure projects through to completion. In its section on overcoming barriers to green infrastructure, the EPA concedes that the top challenges to adoption are: perceptions, unfamiliarity, conflicting codes and lack of government capacity. Most governments do not (yet) have a green infrastructure department, and so these projects require cooperation across departmental lines, often among people who have been doing things a certain way for decades. Robert Thomas is Newark’s Chief of Energy and Environment: “It’s about having frank conversations up front. Being able to be nimble, agile. Spending the time to update everybody.”

Even those who are implementing green infrastructure will admit there is a learning curve. Maintenance, for example, does not yet have an established workflow for job training. Best practices are still being established as the early adopters learn from their mistakes. But the panelists all agreed on the ultimate benefits of green infrastructure: reducing runoff and replenishing groundwater, reducing stream pollution, maximizing returns on dollars spent, beautifying the cityscape, and most of all — increasing resilience to climate change. Jennifer Gonzalez, Hoboken’s Chief Sustainability Officer, summed it up this way: “We’re going to get it right. It’s just a process.”