Skip to main
Next Up: Fixing Flooding in Communities Through Collaboration

Flint’s Wake-Up Call for New Jersey — and the Nation 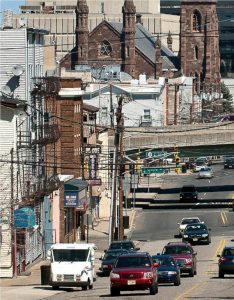 New Jersey communities are not experiencing Flint’s dire public-health crisis. However, while our water systems are better managed and regulated, they share many of the same underlying issues, and are crying out for action.

Children in Paterson, Clifton, Passaic, Prospect Park and Woodland Park, for example, face potential health impacts from lead fixtures and service lines. Our Ripple Effects report describes the impacts in Paterson in particular. Customers of the water purveyor, the Passaic Valley Water Commission (PVWC), experience lead levels at the tap at a frequency that routinely approach or (in 2012) exceed regulatory “action levels.” The action level is only triggered when more than 10 percent of water samples contain lead. So even though PVWC met the overall regulatory requirement for lead in 2013 and 2014, sampling data indicate that some users’ water exceeded the federal limits. This happens when on-site plumbing materials or service lines contain lead. In response, the commission has been treating water with corrosion-control chemicals to limit leaching of lead wherever it might occur. It has run a public-awareness and education program and offers its customers information on a number of Steps … to Limit Your Exposure to Lead in Your Water. Meanwhile public schools have at times warned students not to use the water fountains.

A 2013 survey of the seven major surface water supply systems in the 13 North Jersey counties showed that between 2010 and 2012 none besides PVWC exceeded the federal action level for lead. That doesn’t mean that there aren’t any old lead pipes and plumbing, but rather that the utilities are managing the problem with corrosion-control chemicals. However, in some cases, water users in older homes and schools still experience instances of lead in the water – and citizens are concerned.

In Jersey City the mayor has just announced that a third-party consultant will conduct extra water tests in response to citizen concerns. “The situation in Flint is one that no community should have to experience,” Mayor Steve Fulop said in his statement. “And while testing is done routinely on the Jersey City water supply, residents have reached out asking for comprehensive testing and we thought it was a prudent expense to add an extra level of security for our residents, especially our young children.”

Consumer warnings and education, anti-corrosion treatments and even extra water testing are important short-term strategies. Ultimately, though, the only permanent fix is replacing the pipelines. As Rutgers Professor Daniel van Abs wrote in Ripple Effects, “In most cases, lead does not come from the treatment plant or distribution system itself, but rather from customer service pipes and plumbing.” Old lead pipes and fixtures are one of many expensive water infrastructure needs facing residents in New Jersey and across the country. (Customer plumbing systems remain the responsibility of the property owners, but the utility is required to treat the water to reduce the potential for lead exposure.)

Jeff Hughes, director the Environmental Finance Center at the University of North Carolina, highlights four financial facts that have played out in Flint and “which every water and community manager should be thinking about.”  They include the enormous cost of addressing aging water infrastructure, questions about fairness for low-income residents, the challenges of declining water service demand, and obstacles to regional consolidation.

In the face of critical challenges like these, the Jersey Water Works collaborative helps to ensure every New Jersey citizen, young and old, enjoys modern, healthy water services. The collaborative’s cross-sector membership is pursuing sustainable, cost-effective solutions that, as the our tagline says, advance “smart infrastructure, strong communities.” Join to become a part of the solution. Let’s take the story of Flint as a call to action.