Earlier this month, the Camden County Municipal Utilities Authority’s green and grey infrastructure projects earned national recognition from the Environmental Council of the States. The national acclaim is a result of a competition for the top three most innovative uses of the United States Environmental Protection Agency’s Clean Water State Revolving Fund (CWSRF) since the fund’s origin in 1987.

Camden Collaborative Initiative – Before and after photos of the Phoenix Park project. Photo Credit: Radhika Fox of the U.S. Water Alliance.

The SRF funding, received in Camden through the New Jersey Environmental Infrastructure Trust, resulted in impressive improvements to the city’s stormwater infrastructure and quality of life. Phoenix Park, a five-acre green space by the Delaware River, was created to capture stormwater and provide residents with a waterfront park that previously was an unremediated brownfield site. In Von Neida Park, storm basins, stream daylighting and separate stormwater and wastewater pipes now alleviate the flooding in the park and surrounding streets and the raw sewage backups that plague residential basements. There have been 39 other completed green infrastructure projects, and 17 more are still in progress.

These new stormwater projects capture millions of gallons annually in Camden, a city that has been plagued by chronic flooding. Following the completion of the remaining projects, 30 million gallons annually are projected to be captured. This flood reduction also provides multiple benefits for residents of Camden, including access to green spaces and the Delaware River waterfront and beautification of the city. It also means residents are less likely to encounter raw sewage and flood waters enroute to work or school and in their basements.

These projects and their funding received national recognition in part because a wide variety of groups teamed up with CCMUA. No one organization had the capability to make an impact as large as has been seen in Camden. That’s why CCMUA joined forces with others to form the collaborative Camden SMART Initiative. The initiative includes  CCMUA, the City of Camden, Rutgers Cooperative Extension Water Resources Program, New Jersey Tree Foundation, Cooper’s Ferry Partnership, New Jersey Department of Environmental Protection, public-private partners, community organizations, and Camden residents. 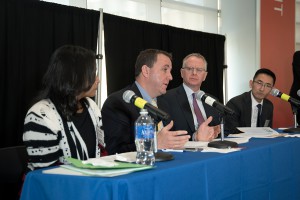 Anthony Perno, executive director of Cooper’s Ferry Partnership, shares the story of what it’s like for Camden residents to have sewage and flood waters fill their basements as a result of inadequate stormwater infrastructure.

Anthony Perno, executive director of Cooper’s Ferry Partnership, shares the story of what it’s like for Camden residents to have sewage and flood waters fill their basements as a result of inadequate stormwater infrastructure.The common interests of the Camden SMART collaborative catalyzed and implemented stormwater infrastructure improvements in Camden. Each member’s unique position brought different skills, resources and connections to tackle an array of projects, all in support of the group’s common interest. Green infrastructure features such as rain barrels and green parks were installed on one side of the city while stream daylighting and pipe improvements took place on the other. Meishka Mitchell of Cooper’s Ferry Partnership remarks, “The collaboration surrounding green and gray water infrastructure improvements in Camden have positively affected revitalization efforts by making Camden greener and a better place to live for its residents while encouraging vibrant sustainable development.” The momentum of the collaborative and its projects was able to attract multiple funding sources, resulting in a much larger impact from what was otherwise a typical NJEIT borrower.

Said NJEIT Executive Director David Zimmer, “It was CCMUA’s collaboration with stakeholders and institutions, combined with the full support of local, county and state government, that ensured the success of the authority’s stormwater improvements and its ability to secure funding from multiple sources. These green and gray water infrastructure projects have been extremely cost-effective in delivering several benefits to the citizens of Camden … The resulting national recognition for CCMUA, the city, the county and the state is well deserved.”

Although the cost of transforming New Jersey’s water infrastructure is jarring, the national recognition of these green and gray infrastructure projects through collaboration and innovation in Camden suggests one successful path forward.