At Jersey Water Works’ first membership meeting on July 25, 2016 in Jersey City supporting members and those interested in becoming members of the collaborative came together to:

Interested in Jersey Water Works but not a member yet? Become a member today! 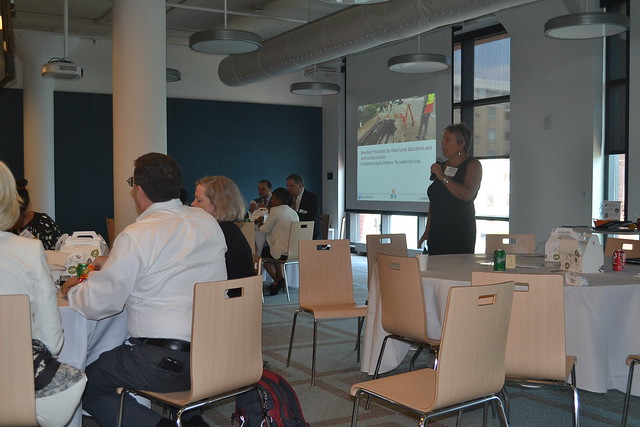 Gov. Christine Todd Whitman served in the cabinet of President George W. Bush as administrator of the Environmental Protection Agency from January of 2001 until June of 2003. She was the 50th governor of the State of New Jersey, serving as its first woman governor from 1994 until 2001.  As governor, Christie Whitman earned praise from both Republicans and Democrats for her commitment to preserve a record amount of New Jersey land as permanent green space. She was also recognized by the Natural Resources Defense Council as having instituted the most comprehensive beach monitoring system in the nation. As EPA administrator, she promoted common-sense environmental improvements such as watershed-based water protection policies.  She championed regulations requiring non-road diesel engines to reduce sulfur emissions by more than 95 percent.  During her tenure, the agency was successful in passing and implementing landmark brownfields legislation to promote the redevelopment and reuse of previously contaminated industrial sites.
Show more
Show less

Howard Neukrug is a local and national leader in the drinking water, green infrastructure, and wastewater utility industries. A builder of regional and inter-agency coalitions and trust-based relationships with regulators, legislators, and communities, he created Philadelphia’s Green Cities, Clean Waters program and served as the chief executive officer of Philadelphia Water’s $1 billion water services utility. He is an advisor to the EPA and other environmental agencies on issues of policy and regulation, water quality and treatment, and urban planning and sustainability and has served on many environmental advocacy organizations. Mr. Neukrug currently teaches three courses at the University of Pennsylvania: “Water, Science, and Politics,” “Sustainable Cities,” and “The U.S. Water Industry in the 21st Century.”
Show more
Show less